Charlie Sheen reveals he is HIV-positive 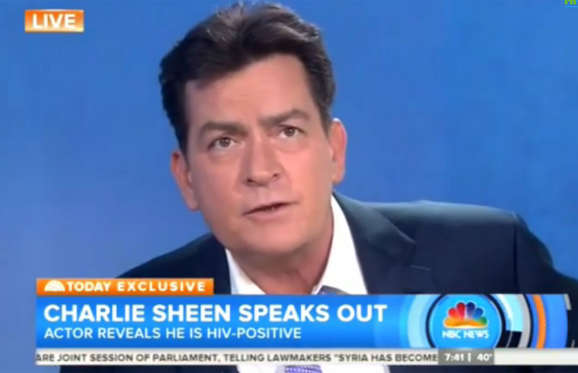 Damn! When I saw the news a couple of days ago, I gasped, 'so it is Charlie, sad.'

For weeks there have been these press reports about a big Hollywood star living with HIV. Pressure was mounting for his identity to be revealed. Then Charlie did the courageous thing; he went on TV and told the whole world of his illness.

The guy has balls the size of football. I know many people are trying to paint him as some kind of monster for keeping his HIV status secret for 4 years, but then who wouldn't? It is not an like an award to shout about.
People with HIV are still stigmatised. Incidentally, last week at Barnehurst Methodist Church I preached about the different kinds of prisons people can be in, and Charlie has been in this prison for over four years, afraid of the isolation he will experience as people will be very cautious about the way they make contact with him. He kept his condition secret because of the HIV-associated stigma and because he wanted his identity to remain Charlie Sheen and not 'that guy with HIV'

Charlie is a good and talented actor and has given many of us many years of excellent entertainment. He has also been in the news a lot for the wrong reasons; the drugs, the wild partying, the alcohol, the call girls. In a world less sensitive, some people will say he had it coming or that they are not surprised, but nobody deserves to get ill.

Many voices have called on Charlie to use his diagnosis to raise awareness about HIV, to let people know it can affect anyone, and that the way he handles his status post-public revelation can also help battle the stigma and ignorance associated with HIV and AIDS.
Read more here

My prayers and support are with Charlie at this time.

Posted by The Blogmaster at 3:30 AM No comments: Links to this post