Azubuike Erinugha, Writer and Director of “The Champion Sportsman” is in a good mood. He has splashed out on 10 Standard Tickets to give away over this weekend.

To get one of these free tickets, all you have to do is purch 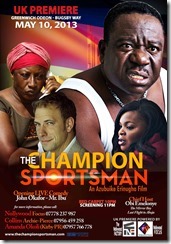 ase a “Two Plus One” Ticket between Friday 19th April and midnight Sunday 21st April 2013.

A “Two Plus One” Ticket is a Couples ticket which would normally admit 2 people,  but this ticket will admit 3 people for a princely price of just £20.00

Event Registration Online for THE CHAMPION SPORTSMAN UK PREMIERE powered by Eventbrite
Posted by The Blogmaster at 6:24 AM No comments:

News of Prof. Chinua Achebe’s death first reached me as a rumour, as most news of death always do. Ever-optimistic, I posted on Facebook and elsewhere that it may not be true. I had really hoped that our literary father had not indeed died.

Passing away at age 82 in itself is not a tragedy. In fact a life that long on earth deserves celebration with dances, with food and with wine.  Such celebrations do not minimise the fact that somebody has lost his life, of course, and especially for members of his immediate family, it is still a death. In the case of Achebe who had given so much and after There Was A Country, there was a sense however in asking what more could he give but be an oracle figure and father? Everything he could ever tell us is already in his writings. Therefore Chinua Achebe will live forever.

It was not long before his death was confirmed. Tributes rolled out, as is the tradition when a person of Achebe’s stature passes on.  Naturally some were very good, others were very bad, and in between were those perfunctory nonsenses by rabid crocodiles who only weeks ago rained verbal abuses on the great man for recording his recollections of Biafra the way he remembered things. Something he had the right to do.

There have also been hundreds of tributary poems or verses written in Achebe’s honour. Some good. Some dreadful. It was probably wrong of me to say people should cut out the awful poetic tributes, but I doubt it was. Perhaps I find many of the tributes purely mathematical and pretentious. There is this feeling that people feel that if they did not say something about Chinua Achebe at this time it might mean they were out of touch or irrelevant and they would miss the boat.

I have not written a tributary Achebe poem or essay. I may never write one. I hope this blog post is not misinterpreted as one. Right now, I am not exactly sure how to react to Achebe’s death, and I don’t know why. Considering that Achebe had so much impact on my life through his work and vision, why did I not become overcome with an overpowering urge to mourn him in words as I did my friends Esiaba Irobi, Eni-Jones Umuko and General Chukwuemeka Odumegwu-Ojukwu? Is it perhaps because I think that it is somewhat incongruent, even sacrilegious, to use the words ‘Chinua’, ‘Achebe’ and ‘dead’ in one breath or sentence?

Or this numbness may be because my personal contacts with Chinua Achebe were quite limited and not contacts that might have meant anything to him anyway.

The first time I met Chinua Achebe was at Government College Umuahia in 1979 during the college’s Golden Jubilee celebrations. I had acted in Ola Rotimi’s The Gods Are Not To Blame, and some members of the cast were presented to key Umuahians, including Achebe, by the late Mr Iheukwumere.  Although I had known about him and his books, and knew he was friends with my brothers Chukwuma and Ikechukwu, the handshake at Umuahia only meant something to me much later in life, in 1986, when he called my brother, Ikechukwu from his hotel in London, and we had driven down to see him and had tea in his suite. I was then nineteen years old, and could not reconcile the quiet, unassuming man that shared very ordinary jokes, with the great Chinua Achebe.

Most of the conversation that evening was between him and my brother, except when he asked me some specific questions about Government College Umuahia of our time. I therefore spent most of the evening watching him and doubting seriously that this was indeed Chinua Achebe. I had expected more colour and more air.  I failed back then to appreciate the power in his simplicity.

Much later, while I was studying at University of Nigeria, Achebe came to our department a few times to see the late Ossie Enekwe, and he would just walk quietly past, often in ‘Biafran suits’, acknowledging our greetings but there was never any fuss. I think back now and wonder why we just stood back and nodded in his direction, saying in low voices, ‘That’s Chinua Achebe’.  We never approached him for autographs. We never thought we should stop him and ask him some questions about his books or about some of the more colourful and memorable characters.  I look back now and see those as wasted opportunities. Even if we had engaged him for one minute or two, those snatched conversations might have helped mould us better as artists.

After reading There Was A Country in 2012, I considered reviewing the book, but felt it might have been better if I interviewed Chinua Achebe instead. I began compiling questions. I wanted to ask him some questions about religion, about being Igbo, and about Biafra. Although he had said things the way he wanted to, there were gaps, or what appeared to me to be gaps in some of the accounts in the books that I needed to ask him about for my own education - as a man born in Biafra and a man who still bears a physical scar resulting from bombing activities by Nigerian forces.  That interview has now been cancelled, unless I find a way to conduct it still; an imaginary interview which must tease out answers Achebe would have given from the hidden texts in his book.

As an Igbo man and as a writer, it will be some time before I fully process the meaning of Chinua Achebe; his life, his work, and his death. NOA

Posted by The Blogmaster at 5:06 AM No comments:

Yesterday was simply beautiful. God had changed his mind about the cancellation of Spring this year, I thought.

But this morning Wintry drafts mock the heatless sun and I think I can hear the music of clattering teeth from the streets come on the wings of those drafts.

Where is my peppersoup?

Posted by The Blogmaster at 6:41 AM No comments: