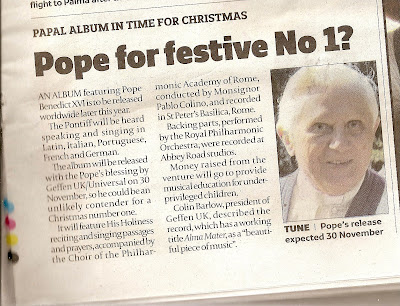 
Posted by The Blogmaster at 1:57 PM No comments:

As a well-advertised fan of Michael Jackson, it is difficult to appear unbiased each time I talk or write about him. About a fortnight after his death, on Facebook, a friend, Chika Omeje started a thread in which he asked in a rather tongue-in-cheek way, how it came to be that Michael Jackson, a black man, could produce blonde blue-eyed children. My immediate reaction was suggesting to Mr Omeje to ask questions about things that were actually his business, and I believe I also asked him precisely how it would improve his life if he found out the truth about the paternity of Michael Jackson’s children.

Of course Mr Omeje is not the first to wonder if the children were biologically Jackson’s children and indeed the questions and scepticism about the subject has been around for a long time. People like Omeje, who wonder how in the world Michael Jackson could father white children have obviously not heard the story of Sandra Laing – the black Afrikaner girl born to white parents. Sandra was so black that her father had to take a DNA test and it was confirmed that he was indeed Sandra’s biological father. Laing is the subject of Skin – a film by Anthony Fabian which has just been released. Question. If two white parents could produce a black child, is it impossible for a black man and a white woman to produce a white child? Far be it of course that I suggest Michael Jackson on top of everything else, also had the kind of genetic oddity that produced Sandra Laing, but it is possible.

Even I, the unwavering Jackson fan once spent time and looked at the pictures of Jackson’s apparent white children and it almost crossed my mind that while they were in fact legally his children, they might not be biologically so. But then I suggested that they might actually be Jackson’s children but may have been genetically-modified to give them a white appearance or to make them white. Somebody asked me why it would cross my mind, a Michael Jackson fan, who has always asked people to leave Jackson alone and stop accusing him of not wanting to be a black man, just why would it cross my mind that he would genetically modify his children to make them white? The answer is simple: Paranoia. If Michael indeed had vertiligo or vitiligo, which resulted in the white patches on his skin he tried to deal with by having painful skin peels, then it stands within the arena of logic that Jackson might have been trying to avoid having children who might inherit that skin disorder, and who might be driven to take the kind of drastic actions he took, only to become objects of ridicule and public scrutiny. The truth is we don’t know the real truth. We may extrapolate all we want, the children are Michael Jackson’s children and that should actually be the end of the story, but it is not.

At first, the rumour mills went to town with the claim that Michael Jackson’s former dermatologist Arnold Klein and former boss of Jackson’s ex-wife Debbie Rowe was the biological father of the children. Dr Klein said to the best of his knowledge he was not the father of the children, although he once donated sperm ‘but not absolutely to him’ (Michael Jackson), whatever that means! Then suddenly an entity known as Mark Lester has come out of somewhere plastering his face all over the media claiming to be the father of Jackson’s daughter, Paris.

Mark Lester is an actor who played Oliver is 1968 and last worked in Crossed Swords in 1977. A person past his due as an actor and largely forgotten, he is rumoured to be in pre-production of a new film “1066” due for release in 2010.

The question that has nagged me since Mark Lester’s claim is what motive could he have for coming out with such a claim even before the King of Pop had been buried.

I reckoned that first of all, Mark Lester is dreaming of a comeback of sorts with 1066 and therefore has roused up this tale to sneak into the consciousness of people and help his comeback. At least by the time 1066 appears in 2010, it will be seen to star Mark Lester the sperm donor, or Mark Lester the man who claimed he made a gift of sperm to Michael Jackson and may be the father of Paris Jackson. There will be people curious enough to go and see this traitor on screen. The other possible motive is that Lester does not wish to miss the boat. Paris Jackson is co-beneficiary of the Michael Jackson estate estimated to be worth nearly Three Hundred Million Dollars after his debts have been paid, and growing with the massive sales of Jackson’s records following his return to the astral plain, and new contracts from the forthcoming Jackson movie, and memorabilia. Lester probably imagines that if he is proved to be Paris Jackson’s father, the little girl who so publicly declared her love for her real father Michael Jackson on July 7, 2009, would turn around and look at Lester and call him Daddy, and invite him to share her fortune.

If this self-serving, back-stabbing man, Lester only imagined that he was at risk of being cut out of the lives of Michael Jackson’s children, he ought to be assured of that now. He is not Paris Jackson’s father, biological or imagined. A father would be sensitive to the fragile emotions of the 11-year-old who has been so suddenly bereaved. A father would have tried to protect her from the carnivorous press, from ridicule, from undue scrutiny. What is shocking is that it never crossed the mind of this traitor that Paris Jackson would end up resenting him for the rest of his earthly life.

As a fan of Michael Jackson’s music and work as an artist, I have sometimes taken a dim view of some of his decisions. In my view, the worst decision Michael ever made was declare Mark Lester a friend, and make him godfather to his children. The man deserves an F-word but that word is certainly not “Friend.”

Sadly, as I write this, Michael Joseph Jackson, the world’s greatest entertainer of all time, the King of Pop, and loving father of Prince Michael I, Paris Katherine, and Prince Michael II, is not available for comment.
Posted by The Blogmaster at 10:46 AM 1 comment:

Are now too grey to dye.

Every cell in me

Is a contradiction of sorts;

Is weighed down by fault.

I have visited goodness

The saddest part of all is

I know that you know it well;

If my path had no thorns

I would not sin. Yet thorns

On my path are not

Posted by The Blogmaster at 5:49 AM No comments:

(A poem by a father for a future father; Arinze Azuonye, & all fathers on Father's Day 2009)

There was a time I only imagined it;
to be the broad-chested father
of a bunch of kids in good working order,
big man about house, building a squad
of God-fearing kids, giving orders,
a stern but affectionate scolding here,
a frightening, yet warm stare there,
talking volumes and instructing across
the room with a slight shake of head.
Imagining this wonder filled me with hunger
for a lifetime of teaching, a lifetime
of learning from the seeds of my own loins.

Sometimes a brooding dream would fruit,
as it did on that blazing Summer morning;
The Almighty snapped his fingers,
He snapped me out of my dream-trek.
He made my wife and I step out of time.
The music had begun! and I, long-gifted
with two left feet, was eager to dance,
and indeed I danced in the air.

Two years and counting, I say with great cheer,
any man for whom God has made it possible
let him join me on the glorious dancefloor
of fatherhood - this is where I lose myself,
this is where I savour wondrous perks:

The slashes warm on my face that then wet my shirt,
and heavenly scents of soft golden relief on my shoes.

That purely manipulative cry for attention
at moments I must take important phone calls.

Helplessness when my little scientists make
submarine of my cellphone in a cup of water.

The bliss of my children converting me
into a living Super King Size bed.

They turn my belly into a trampoline
and my legs are their playground slides.

Best of all is when they smile as God must smile
and hug me so tight I cannot breathe.

"A Father's Story" was first read in public at the Redeemed Christian Church of God, Dartford, on Father's Day 2009.

Copyright 2009 Nnorom Azuonye.
Posted by The Blogmaster at 9:46 PM No comments: 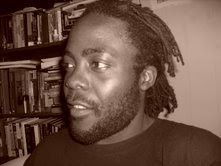 The new issue (July to September) of
Sentinel Literary Quarterly,
the online magazine of world literature went live on the 31st of July.

What is in this issue?

"The Faker" - a short story by Laura Solomon

Go to Magazine now:
Sentinel Literary Quarterly>>
Posted by The Blogmaster at 11:04 PM No comments: