Biafran Babies Must Not Be Afraid 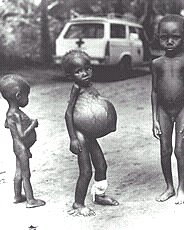 Crawling the Internet in August 2005, I found information on a call for submissions to ‘Biafran Babies – Stories Signifying War’ an anthology of “memoirs, narratives, stories, and tales which represent first hand (direct), second hand (received/retold), or imaginary (fictional) accounts of childhood experiences of the Biafran War from the point of view of the Biafran child in any part of the world before, during, or after the shooting conflict.”
http://www.h-net.org/announce/show.cgi?ID=146825

This call was made by the anthology editor, Obiwu, who is the director of the writing centre, Central State University, Wilberforce, USA. (obiwu@yahoo.com). I have known Obiwu for a while, therefore I contacted him by phone to learn more about the project, which I thought was important and ought to be encouraged.

Nearly 40 years since the declaration of Biafra, people are not speaking enough about Biafra or documenting its story for posterity. Not in any substantial way in any case. I felt compelled to place a copy of the call for submissions on my website at www.nnoromazuonye.com.

Strangely, barely two months after posting this on my site, I have received numerous e-mails from friends and family in Nigeria expressing concern that I am putting myself in a position where I may be seen as being a part of the cause for the actualisation of Biafra. Particularly, these messages express horror at my insistence in several of my profiles in giving my country of birth as Biafra.

This is quite baffling. All I have done is post a call for submission of essays, poems and short stories for an anthology edited by a friend. I have not asked anyone to go to war. I lost the first three years of my life to that bloody war between Nigeria and Biafra, as I hinted in one of my poems:

I will never know how it feels
to be born in a land not torn
by war, (1)

I should think that I would know better than to ask anyone to go to war or do anything that will encourage strife or bloodshed. As you might know, in some of my editorials I have condemned warfare in any form because;

I sing in the choir of small sane voices,
the often-deemed mad, pools of poets
like clans of cursed scribes, who record
in delightful words,harrowing deeds
that eat the world to death, and capture
the blood for blood war songs of world leaders.(2)

In addition to the well-known marginalisation of Igbo people in the country that re-assimilated them in 1970, are the Igbos really living in such a state of fear in Nigeria? There have been reports of course of the torture and execution of several members of the Movement for the Actualisation of the Sovereign State of Biafra (MASSOB), therefore it is understandable if MASSOB members are afraid. But for the rest of the Igbo people, those for whom Biafra was and is a part of their history, why is Biafra such a taboo word?

Other facts concerning my circumstances are, to begin with, following the apparent fall of Biafra and the re-assimilation of the country by Nigeria, I became a Nigerian citizen in 1970. Twenty years later (1990), on a wet day in Calabar, Cross Rivers State, I stood shoulder to shoulder with hundreds of other university graduates and mumbled a ‘pledge to Nigeria my country, to be faithful, loyal and honest…’ I carry a Nigerian passport and the National Youth Service Corps certificate is still in one of my files. Therefore, for all practical purposes, I am a Nigerian.

However, like I have acknowledged and will continue to acknowledge the Republic of Biafra as the country of my birth, even if it exists now mainly in my mind. Mostly by stories passed down by family members, and by the few books that are out there. I encourage all Biafran babies, especially those born between June 1967 and January 1970 not to allow fear of the Nigerian government’s agents force them into denying their history. Let them remember the words of George Santayana; “Those who do not remember the past are condemned to repeat it.”

I don’t know if Biafra will ever become again in our lifetime. But I have never stopped wondering how things might have been had Biafra survived. I doubt that both Biafrans and Nigerians from time to time don't ask themselves the same question.

There are tears for the brook from which I draw
waters of identity, sounds of my tongue
and the story of my name.

I mourn the land of light plunged into darkness
before the first gasp of my third birthday
condemning me to three decades of fugitive life –
even in the bowels of the whale
that crushed and swallowed my homeland,
entombed its banner of The Rising Sun.(3)

The fact is that there is fear in the hearts of many Biafran children, and this must not be so. These fears betray our brothers and sisters who died in Biafra. Those of them who survive till this day nourish themselves with memories of a fallen nation. But they speak, loudly still:

We are the initiates
seers seasoned in redseadeath
returned to the fold with old fears
forged into iron oracles
in the hailfire.(4)

I don’t know about every other Biafra-born child, but that war impacted on my life in more ways than I can count. Should I begin with my family’s material losses, or my relatives who died both as civilians and as soldiers in Biafra? I don’t remember them because I was only a baby, but their photographs talk to me still, always.

This is still our story! Time has failed to heal
wounds inflicted by pictures of spattered flesh
that grinned at us from bloodied mantelpieces.
We have yet to learn to sleep, daily reliving
mighty explosions and their afterglow
frozen in malignant memories.(5)

As recently as the year 2000, my friend Emmanuel Okwor was butchered in Kaduna by Hausa Muslims in one of those disturbances that make it all even harder to forget. Moreso, as the pogroms that happened in 1966/67 are still with us today, even if they are not of the same magnitude.

Even my northern sojourn along dusty streets
of Kaduna and Kano, butchering sites
of children of the light, tell of my fretting feet
urged on by hope that out of the ashes of war
unity may sprout. Even this sojourn of reconciliation
is determined by a flight through a crack in the wall
of another slaughtering saga…(6)

The least we could do is say our name. And we must not forget our story. If we forget, we betray every Biafran blood spilt in Biafra. We betray ourselves.