Say it loud, Mr Brown.
(A kwansaba for James Brown)

Talented biographers could write a thousand volumes on James Brown, and they couldn't even begin to write anything that would justify a life like his. At 73, he was not too young to die, of course, yet I felt shock and sorrow at his passing. It certainly was not what I expected or wanted to hear as news on Christmas day. The wonderful thing about a life like Mr Brown's is that for as long as it is still possible on earth to play recorded music, sex machines from all over the world will still feel good, many shall still declare it a man's world at Ying Yang debates and every time verbal or clay brick is thrown at a black man and he gets tempted to peel his skin and become a white man, Mr Brown will still roar in his ear, 'Say it loud, I am black and proud.'

Now we demand a chance to do things for ourself
We're tired of beatin' our head against the wall
And workin' for someone else
We're people, we're just like the birds and the bees
We'd rather die on our feet
Than be livin' on our knees
Say it loud, I'm black and I'm proud

East Saint Louis/Edwardsville, Illinois--For its Spring 2007 issue, Drumvoices Revue, a multicultural literary journal co-published by the Eugene B. Redmond Writers Club and Southern Illinois University Edwardsville, is issuing a “call” for “Kwansabas for Maya Angelou and Quincy Troupe.” The original date for submission of the seven-line poem—Nov. 1--has been extended to Jan. 1, 2007.

The kwansaba, a 49-word poetic form invented during the Writers Club’s 1995 workshop season (in East St. Louis), consists of seven lines of seven words each; each word must contain between one and seven letters. Exceptions to the seven-letter rule are proper nouns and some foreign terms. Previous issues of Drumvoices have featured kwansabas for Katherine Dunham (2004), Amiri Baraka and Sonia Sanchez (2005), and Jayne Cortez (2006). Following is an
example of a kwansaba from Drumvoices #13:
Neo Kwansaba in Barakan Verse
(Mali Newman)

Poetree grown from stanzas tongues my ears
Don’t play Dough Ray Mi Vaso Latte
Unless Dada Doowop Dadaism is dead, unless
Trans (it) Blues in C, major or minor
Died by volumes twenty one times, don’t
Play scale up/scale down, while Baraka
Breaks off a piece of his mind.

The Club is currently celebrating its 20th year of twice-monthly meetings (first/third Tuesday), 6:00-8:00 p.m., in the Library (Building B) of the East St. Louis Higher Education Center, 601 J. R. Thompson Drive. Meetings are held September through May. All writers, from beginners to professionals, are welcome.
Posted by The Blogmaster at 1:27 PM 1 comment: 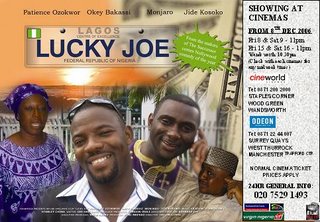 Following the Premiere of Lucky Joe, it now goes on general release at:

Lucky Joe is written and directed by Obi Emelonye
For more information visit Film Africa
Posted by The Blogmaster at 8:55 AM No comments: