The fight against Covid-19 is not for Boris Johnson alone 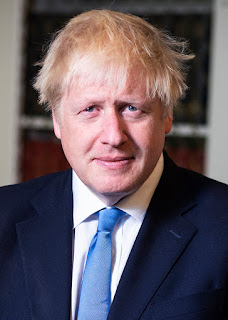 People living in Britain are complex. A lot of people are not obeying the rules about social distancing, face covering and washing/sanitising hands.
In the last few weeks I have taken several essential journeys by bus and half the passengers have no face covering. They sneeze and cough into the palms of their hands and then hold on to the rails without even bothering to sanitise their hands.
I am ashamed to have been on a bus once and two Igbo people (my own people) with no face covering commented on those who wore masks:
"Ndia yiri mask ha adichaa ka ewu" (These people wearing masks look like goats).
"Hapu ihea. Oya but oya oyibo" (Leave this thing. It is white man's disease).
I have seen also, old white couples and Asian couples, clearly vulnerable, riding without face coverings sneezing and coughing. Spreading this thing. I had to ask one bus driver why half the passengers on the bus had no face covering. He shrugged his shoulders and said they might be exempt and that it was not his job to police people wearing face covering. I would have thought the bus drivers would not let anyone on who did not have a face covering or evidence that they are exempt.
Now the virus has mutated again. The new strain in 70% more transmissible. It is spreading in London like wild fire. We are now in another lockdown with loads of loopholes to give the economy a chance to breathe whilst giving power to Covid.
Everybody is blaming Boris Johnson.
Everywhere you listen, people are saying Team Boris is shit. Really?
The truth is, if the people living in Britain don't change their ways, if people in Britain do not take Coronavirus seriously, and this is after 67,000 people have died (Official, massaged figures! We all know it is more likely 100,000 deaths since they only count those who die within 28 days of testing positive, so, those who die 29 - 50 days after testing positive do not die from Covid.) It will get uglier and deadlier.
Whatever decision Boris John takes, whether he locks down too late or relaxes restrictions too soon, he is always going to be wrong.
All us us living in this country must play our parts. And for the critics who think Boris Johnson spends a lot of time doing nothing. He is a politician after all, and as John le Carre once said; "If there is one eternal truth of politics, it is that there are always a dozen good reasons for doing nothing." I don't think he spends a lot of time doing nothing. I think he lacks the courage to give us bad news and only spills it when he no longer has a choice or has failed to wish it all away.
It is down to us. Hands. Face. Space. The Blogazette.
Posted by The Blogmaster at 11:57 AM No comments:

Lock Down Fun - The Marsh Family

I saw The Marsh Family on the news this morning performing Les Mis "Lock Down" and it was simply great fun. I just thought I should share it. Enjoy.
Posted by The Blogmaster at 12:31 PM No comments:

Email ThisBlogThis!Share to TwitterShare to FacebookShare to Pinterest
Labels: Les Mis "Lock Down"., The Marsh Family

Good habits in a time of Coronavirus

The things we do these days; washing our hands thoroughly, using hand sanitisers (if we have any), wiping down shopping before we store them, not shaking hands, avoiding people coughing or sneezing violently, and social distancing, are things we should have been doing all along anyway.

In truth, there has not been reason for us not to shake hands in the past. A good, strong handshake can help foster friendship and trust. As a preacher, I always stood at the exit of the church to wish congregants well after the service, and I shook everybody's hand as they left. This has of course stopped since the Covid-19 Pandemic.

Social distancing however was not always possible, if like me, you work in Central London. I would get on a crowded Southeastern Railway train from Welling or Woolwich Arsenal to Charing Cross, then change to an overcrowded Northern Line tube train to Goodge Street and then walk to the office. Fresh air was only possible after Goodge Street. These journeys were torture, especially as there was hardly a day that the Southeastern trains did not pause between stations due to signalling problems, passenger action or faulty trains. Each time the train stopped for an uncertain length of time, uncomfortable passengers breathed fast, and coughed and coughed, rendering millions of bacteria or viruses homeless or seeking new homes.

These uncomfortable train journeys continued, even after Covid-19 hit the England as the government hesitated over the decision to ask us to stay at home and work from home. For me, it was only eight days ago we were asked to work from home. In the six weeks prior to this, I spent the days praying and covering my family with prayers; my wife out teaching students she could not be sure observed the safety rules outside of school, my older sons and daughter out to school, where they interacted with teachers and other kids who may not have been observing the safety rules, and my youngest son at the childminder's.

Now we are all at home and relatively safe. I use the word 'relatively' because once or twice a week, my wife or I go to the shops to buy foodstuff. The problem is that with all the devastation Covid-19 has dealt out, people do not really maintain the social distancing rules. I have had to ask people to step back and to use the guide lines some of the supermarkets have provided instore to keep people at safe distance from each other.

It will help all of us during this Covid-19 pandemic to practice these good habits and to carry on with them after we have triumphed over the virus, because we don't know what will come after coronavirus.