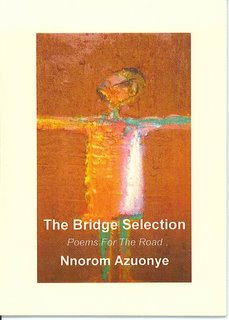 
Nnorom Azuonye’s second poetry collection, A Bridge Selection, is characterized by a passionate intensity which imbues his lines with lyrical tenderness and defiant hope.

Azuonye, whose works have appeared in journals as varied and eclectic as Orbis, World Haiku Review, Eclectica Magazine and Agenda is better known as founder of the Sentinel Poetry Movement and Editor, Sentinel Poetry Quarterly.

A Bridge Selection is a hybrid work, bridging the gap, as its name implies between Nnorom’s debut collection of poems, Letter to God & Other Poems and his forthcoming sophomore effort, A Juror Of My Time due out in Spring, 2007.

The poems in A Bridge Selection plumb the depths of varied human emotions traversing different emotional trajectories and planes as they take us from a man watching a bird feeding on rail tracks to a man reminiscing over his distant homestead. There are also reflections of the poet’s personal history which becomes intertwined with the larger history of his benighted nation. Then there are the love poems, of the man contemplating his sleeping lover on the 10.25 train to East Croydon and another wondering what happened to the sweet love they once shared.

These poems are unabashed testaments of a poet who is not afraid to unburden himself through the ink flowing out of his pen. These are poems that spring forth from a fountain that spurts from the heart. Alone in exile, the poet persona thrives on large helpings of regret and nostalgia. The regret stems from the psychic and emotional distance from his home, the distance that engenders his cry at the tail end of the poem “Liberty “ where we read:

“My spirit cries, “O that I also could have
Such freedom without first having to die.” (p.2)

In the second poem of the collection, “In the Kitchen” the poet presents a domestic snapshot of a man and woman from two cultural backgrounds that are feuding over words that do not travel well across cultures.

The poems in this section are poems of loss, nostalgia and regret; the loss of innocence, nostalgia for old simpler times. The poet’s forced absence from his homestead is akin to bondage and thus the constant references to bondage and freedom. But there is defiant hope shining through always like the sun breaking through stubborn clouds.

“My village calls out my name through the hills
And I must go to embrace her warmth and peace…
Prepare the drums.” (p.5)

The second section of the collection is replete with poems that contemplate the end; the passing from this realm into another. In “Strings of Wilderness”, the archaic inversions at the beginning of the poem jar, while “When Bells Toll at Methodist Church” recalls John Donne’s eternal poem, “For Whom the Bell Tolls” but instead of gloom, the bells stirs in the poet a “dance of jubilation.”

The two other poems of the section “On the Wings of Songs” and “Wake” have a funereal air about them. Steeped in the traditional Igbo tradition of the poet, the highly evocative poems capture best the mood of the section especially with the Igbo epigram at the beginning of “Wake”

The love poems which pepper the Third Section are well realized, evoking memories of youthful shenanigans and passionate dalliances. The poet who is made giddy by the memories of good times past cries: “Memories! They shall make a songwriter of me.”

And even though he knows that memories are best left in the past where they belong, this poet who is high on nostalgia confesses that:

The poems that make up the Fourth Section, “A Fugitive Life” are the most intense and emotional. These are the lamentations of a fugitive forced to flee his homeland by circumstances he has no control over. These are poems that speak powerfully of pain, of a “land that drinks the sweat of her sons” where “The air is filled with stories of beaten warriors.”

“Dead Sun” is a comment on the rising sun insignia of the defunct Biafran Republic while the entire poem is a moving history of his country which the poet calls “the land of light plunged into darkness.” In this poem, the strands of the personal are interwoven into the larger public tapestry. The poet’s personal history like that of his nation is one of pain, an unending saga of blood shed and internecine wars, what the poet calls “cocktails of misery for me in limbo.”

Whether writing about war; the American carnage in Iraq, the collateral damage from the war as in Ali, the limbless lad or about abortion in “Thorn” where the poet wishes that he had not “nodded to a white coat/to pull that thorn from my future’s flesh,” despair never manages to eclipse hope, because there is optimism, that flickering light illuminating the dark tunnel, which is why the poet refuses to heed the call of the poet Victor Ehikhamenor who admonished: “Do not write about flowers when the roads are bad.”

He will write about flowers because as he says “a hope bird sings at my shoulders” and also because he makes it clear that:

“If I don’t write about flowers,
You see, demons shall vanquish
My loftiest dreams. They will regress (sic) me
To the age of darkness, and I, optimistic still,
Refuse to be walked backward. (P.39)


This review was first published in ThisDay (Nigeria) on Thursday, July 9th 2006.
Reproduced by permission. Copyright 2006: Toni Kan
Posted by The Blogmaster at 10:57 PM