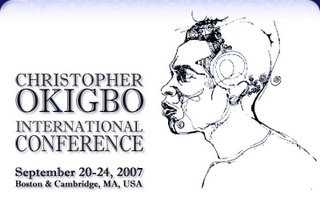 INTERNATIONAL CONFERENCE ON THE LIFE & POETRY OF CHRISTOPHER OKIGBO, 1932-67


It is with great pleasure that we write to invite you to participate in the first international conference on the life and poetry of of Africa’s leading 20th century poet, Christopher Ifekandu Okigbo. Co-hosted by Boston University, Harvard University, University of Massachusetts Boston and Wellesley College, the conference is scheduled for September 20-23, in Cambridge and Boston, Massachusetts, USA, as part of the worldwide celebration of the poet’s legacy on the occasion of the 75th anniversary of his birth and 40th anniversary of his death.

As a specialist on Okigbo’s poetry, it is our hope that you will be able to present a paper at the conference. Each paper is expected to explore any aspect of the conference theme (above) with reference to Okigbo’s poetry sequences—Four Canzones, Heavensgate, Siren Limits, Fragments out of the Deluge, Laments of the Silent Sisters, Lament of the Drums, Distances, Lament of the Masks, Dance of the Painted Maidens or Path of Thunder. Contributors may focus on the poet’s representation of the ideals of the open society in one or more specific sequences. Alternative topics for inquiry include the global contexts and influences on Okigbo's work, intimacy and freedoms of _expression, interracial and intercultural exchange, syncretistic ritual, the enigma of cultural origins, etc. as represented in his poetry and life as a whole.

As far as possible, contributions should include a brief summary of the state of Okigbo criticism and a critical examination of the challenges of teaching and learning from the poetry, as they pertain to the topic examined. Titles and 250-word abstracts of proposed papers should be sent not later than January 31, 2007, to Professor Chukwuma Azuonye, Chair, 2007 Okigbo Conference, Africana Studies Department, University of Massachusetts at Boston, 100 Morrissey Boulevard, Boston, MA, 02186-4310, or by e-mail to Chukwuma.Azuonye@umb.edu.

Preceding the conference will be an exhibition of drawings and paintings inspired by Okigbo’s poetry (beginning from August 18) and a workshop for high school teachers featuring Okigbo’s poetry alongside Chinua Achebe’s Things Fall Apart and Chimamanda Adichie’s Purple Hibiscus. The art exhibition, scheduled for Boston University, will feature such leading artists as Uche Okeke and Obiora Udechukwu alongside Okigbo’s daughter, Obiageli Okigbo. The teachers’ workshop targeted at promoting diversity and multiculturalism in high school literature and social studies curricula will draw together over 100 teachers who are expected to introduce Okigbo and other African writers into their classrooms.

One of the major highlights of the conference is the first ever joint appearance on a public forum of the two women closest to Okigbo’s heart—his wife, Safinat (Judith Sefi Attah) and daughter, Ibrahimat (Obiageli Okigbo). Other highlights include: poetry reading by vintage coterie of contemporary African poets (including Gabriel Okara, J. P. Clark, Niyi Osundare, Tanure Ojaide, Funso Aiyejena, Ifi Amadiume), dramatized reading of Okigbo’s Dance of the Painted Maidens, two films inspired by Okigbo’s poetry (Branwen Okpako’s The Pilot and the Messenger or Who Killed Christopher Okigbo, and Toyin Adepoju’s Meditations on Labyrinths, and round-tables reenacting all the major connections in the poet’s life (Ibadan, Fiditi, Lagos, Nsukka, Makerere). There will be forums for launching new books by and about Okigbo as well as for the Christopher Okigbo Foundation and the Christopher Okigbo Society.

The conference will conclude with a gala nite featuring the highlife music of the late fifties and early sixties.

NOTE: Potential participants should please note that it has been established beyond all reasonable doubt and with reference to surviving close relatives of the poet (his brothers, sisters, wife, and daughter) and his close personal friends (Chinua Achebe, Vincent Ike, and Ben Obumselu, among others), that Okigbo’s middle name is Ifekandu NOT Ifeanyichukwu. His brother, the later Dr Pius Okigbo, to whom he dedicated his first book, Heavensgate (1962) and with who he was very close, writes in his 1994 toast (reprinted in Critical Essays on Christopher Okigbo, ed. Uzoma Esonwanne, 2004), “His parents named him Ifekandu, ‘greater than life”; they baptized him Christopher, the name he wore to his grave.” In addition to Christopher, Okigbo was given another English name, Nixton (see Ben Obumselu, Christopher Okigbo: A Poet’s Identity,” in The Responsible Critic, ed. Isidore Diala, 2006). Thus, his full name is Christopher Nixton Ifekandu Okigbo.
Posted by The Blogmaster at 6:40 PM