Another year ends with another big death 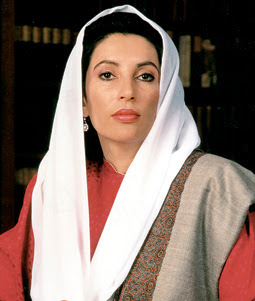 I am yet to read anything that does not say Saddam Hussein was a beast with his heart somewhere in the back. Tales abound of thousands of people he killed, or ordered their deaths, or were killed in his name. 30th December, 2006, just over three years after the American-British invasion of Iraq, the brutal dictator kept his date with the hangman. As a human being respectful of human life and sickened by the deaths at Hussein's hands, if the allegations were indeed true, I should have been unperturbed by his death. As a human being fundamentally against capital punishment, a nice-sounding tag for murder by the state, I was saddened by his passing, especially by the way he was paraded on television as he stepped up to the hangman's noose.

Fastforward to 27th December 2007. Benazir Bhutto is gunned down. It is difficult to decide what to mourn about Benazir. The Political animal. The beautiful woman. The beacon of progress of segments of the Pakistani world. The naive muslim who believed that Islam forbids attacks on women. Maybe if she did not believe that stuff, she would not have gone back to Pakistan and might still be alive today. This is totally academic. The woman is gone, and I am surprised at the sadness I feel about her death. Still I applaud the courage with which she lived her life and faced her ultimate destiny. You may have seen her interview with The Sunday Times in April 2007 when she was questioned about the danger to her if she returned to Pakistan and she said simply, "I don't worry about it. If it's time to go, it is time to go."

It was time to go yesterday. I just hope that the ordinary people of Pakistan will understand that it does not have to be time for them to go on account of Benazir and go killing each other in the streets. There have already been anough deaths in Pakistan since her return. Let them give life a chance as we approach the threshhold of another year.

Nnorom Azuonye
image from harrywalker.com used on this blog for non-commercial purposes only.

Posted by The Blogmaster at 4:18 AM